World This Week May 2022: China: Boao Forum for Asia brings the world’s attention to the Indo-Pacific 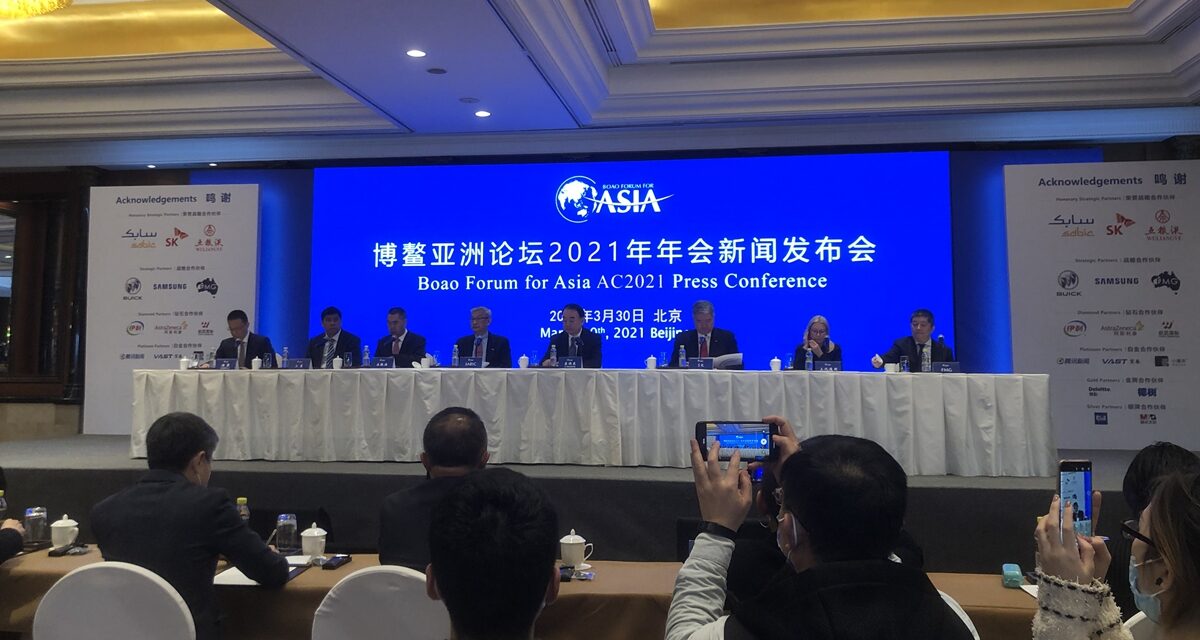 China: Boao Forum for Asia brings the world’s attention to the Indo-Pacific 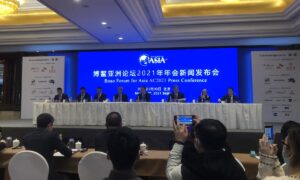 On 20 April, China hosted the Boao Forum for Asia in Hainan titled “The World in COVID-19 and Beyond: Working Together for Global Development and Shared Future.” President Xi Jinping delivered the keynote address and stressed promoting multilateralism to develop the post-pandemic global economy and proposed a Global Security Initiative to promote the security of all countries in the world.

Xi said: “It is important that we stay committed to maintaining security in both traditional and non-traditional domains, and work together on regional disputes and global challenges such as terrorism, climate change, cybersecurity and biosecurity.”

He also highlighted other challenges that the Global Security Initiative would work towards these challenges include respecting and protecting the sovereignty and integrity of all countries, rejecting the cold war mentality in international affairs, avoiding sanctions, and resolving issues through diplomatic means. On protecting regional peace and stability, Xi said: “we should resolutely safeguard peace in Asia. Peace and stability in our region does not fall into our lap automatically or come as charity from any country. Rather, it is the result of the joint efforts of countries in the region. The Five Principles of Peaceful Coexistence and the Bandung Spirit, first advocated by Asia, are all the more relevant today.”

The forum was attended by over 3000 delegates representing the governments, businesses, academia, and media worldwide. The forum also invited religious leaders and others.

On 23 April, a CGTN opinion said: “It is believed that BFA 2022 can be an opportunity for representatives from various countries to come together to find creative solutions for the problems facing Asia and the world at large. The COVID-19 pandemic has revealed the fragile nature of the international order, both politically and economically.”

What does it mean?
The Boao Forum for Asia in April 2022 registered the primordial fight for the Indo-Pacific region. China has made sure to emphasize its influence in the region. It also recognizes its stakes and investments in Asia and knows that it cannot afford to lose ground to any other country. The main challenges to the Chinese hegemony in Asia is caused by the US and the growing investments of the West. Although it’s hard to restrict the actions of other sovereign countries, the forum aimed to reinforce its supremacy in the Indo-Pacific. The Asian countries will play a vital role by becoming the deciding factor that can impact the future of the world order. 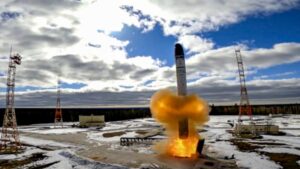 On 20 April, Russia successfully test-fired its RS-28 Sarmat super-heavy, thermonuclear-armed intercontinental ballistic missile (ICBM). Dubbed ‘Satan-II’ by the West, the ICBM was launched from the Plesetsk cosmodrome in the Arkhangelsk region. The liquid-fuelled, multiple independently targetable reentry vehicle (MIRV) is an exo-atmospheric ballistic missile capable of deploying multiple nuclear warheads. These warheads could be launched at hypersonic speeds within 18,000 kilometres and can carry a ten-ton payload.

On 20 April, Russia’s president Vladimir Putin, on the eve of the launch, stated: “This truly unique weapon will strengthen the combat potential of our armed forces, reliably ensure the security of Russia from external threats, and make those, who in the heat of frantic aggressive rhetoric try to threaten our country, think twice.”

Russia’s defence ministry released a statement saying: “Sarmat is the most powerful missile with the longest range of destruction of targets in the world, which will significantly increase the combat power of our country’s strategic nuclear forces.”

On 19 April, Moscow had ‘properly notified’ Washington of the upcoming launch fulfilling its obligations under the 2011 New Strategic Arms Reduction Treaty (New START treaty). The treaty limits Russia’s and US’s intercontinental missiles and bombers. The US department of defence spokesperson, John Kirby, said: “Testing is routine and it was not a surprise. Of course, the department remains focused on Russia’s unlawful and unprovoked aggression against Ukraine.”

What does it mean?

First, Russia’s focus on posturing and symbolism. With the annual Victory Day on 9 May just weeks away, the timing of the test reflects that Russia wants to showcase its technological prowess to the world. The date will also mark 75 days of fighting since the invasion began on 24 February. As Russia seeks to reposition itself, the date holds a symbolic weight as there are fears about Putin calling for total mobilization of Russia’s forces and distracting its domestic audience away from the ongoing conflict.

Second, the fear of isolation. The launch will feed into the growing concern about how increasingly isolating Russia might see Putin launching more provocative actions. Third, the question of the game-changing capabilities of the ICBM. The Pentagon has called it ‘routine’ and dismissed threats surrounding the launch. Eulogized by Putin as a unique weapon, but more tests would be needed before Russia could deploy the new-age missiles in place of the ageing SS-18 and SS-19 missiles.

Finally, the reappearance of nuclear disarmament discussions. The war opens up the possibility of having a more inclusive conversation on disarmament to recognize the idea of a nuclear-free world and try to mitigate the eventuality of existing nuclear weapons. This also serves as an opportunity to get rid of nuclear posturing and prevent countries from playing the nuclear card during conflicts.

The Solomon Islands: China’s security agreement and a US visit 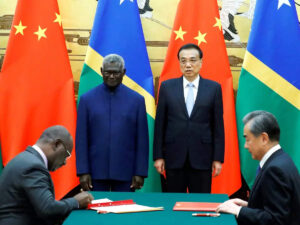 On 22 April, a senior US delegation, led by the national security council’s Indo-Pacific coordinator Kurt Campbell and the assistant secretary of state for East Asian and Pacific affairs, Daniel Kritenbrink arrived in the Solomon Islands to express their concern over China’s increased activity in the region.

On 21 April, New Zealand’s prime minister, Jacinda Ardern, drew attention to Beijing’s “growing assertiveness” in the Pacific region and questioned the motives behind the security treaty that China and Solomon Islands signed. She said: “One of the reasons we’ve expressed this disappointment [is] Australia and New Zealand both have heeded the call of the Solomons for support during recent disruption. And we’ve again highlighted that should any extended need exist, we are there to help and support. What gap remains that requires such an agreement with China?”

On 20 April, Taiwan’s ministry of foreign affairs (MOFA) advised the Solomon Islands that it should not let itself be used as a puppet after signing the agreement with China.

On 19 April, China’s foreign minister Wang Wenbin announced the signing of an inter-governmental framework agreement with the Solomon Islands on security cooperation between the two countries. The pact was signed by state councillor Wang Yi and Solomon Islands foreign minister Jeremiah Manele. Wenbin said the agreement seeks to enhance “social stability and long-term tranquility” in the islands and stressed that it is not directed against any third country, but rather serves the interests of the South Pacific area as a whole. On the same day, the Australian government claimed that the agreement was negotiated behind closed doors and stated that it could “undermine regional stability.” The government stated it was “deeply disappointed” by the agreement’s signing. The foreign minister of Australia, Marise Payne, and the minister for the Pacific, Zed Seselja, said Australia would “continue to strongly encourage the Solomon Islands to engage in regional dialogue and to work with the Pacific family first, including prior to seeking security assistance from China under this arrangement”.

What does it mean?

First, a new frontier in big power relations in the Pacific. Since the signing, the Solomon Islands have become a theatre of a new cold war for the western powers and China. The fact that the US embassy in the Solomon Islands has been closed for 29 years and the most recent visit to Fiji by a US Secretary of State was 37 years ago says enough about the Pacific Island Countries becoming someone’s backyard or a pawn in a geopolitical conflict.

Second, the China agreement is taken for granted. Several senior US officials are now interested in visiting the various PICs after all these years. This clearly exposes the US cold war mentality to use the South Pacific region against China.

Third, a bitter pill. To offset China’s growing influence, it is expected that the US and Australia would enhance military cooperation and civilian investment in the Solomon Islands and other South Pacific countries. Through the AUKUS agreement, the US has frequently outsourced its monitoring operations in the region to Australia. Both countries believe that by deploying military forces to the islands, they can maintain their regional influence. The emergence of the agreement is, without a doubt, a bitter pill for all nations that have been engaging in recent months to challenge China’s influence in the Pacific through various measures.

Fourth, the implications for the Solomon Islands. With an increase in China’s presence in the island nation, it could lead to a similar fate as Djibouti, where a commercial port eventually became a military port. Every time China signs a deal or invests through its Belt and Road Initiative, or any agreement is inked, it quickly draws attention due to China’s well known “death-trap” or as the world calls it, “debt-trap” policy.

The report has been modified by India News due to space considerations. 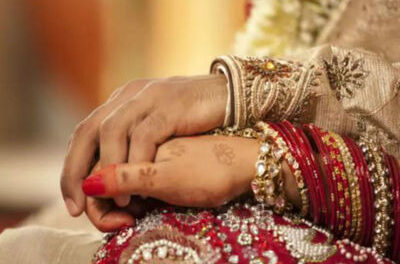 Lens on NRIs who desert wives in India 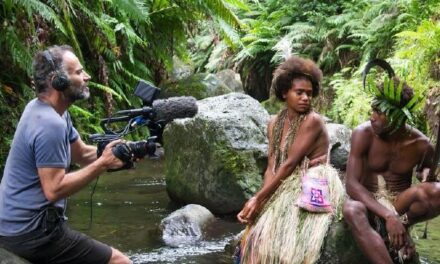 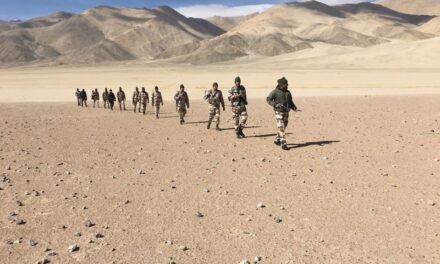